What the hell is a bofedal?

Posted on September 19, 2014 By shapeofthingstoni

It’s a question I asked myself on my first day of work here in Lima. On Day 1 I arrived at the office and was handed an environmental impact assessment (EIA) for an irrigation project and asked to provide my opinion on the quality and the shortcomings of the EIA and the project. What on earth is a “bofedal”?

Of course, the document was in Spanish, and the project was planned in an ecological zone I knew absolutely nothing about: the puna. The puna is the high plains of the Andes: a dry, treeless landscape found over 3500 mASL (that’s metres above sea level for the uninitiated); the altiplano of the Peruvian coastal desert, following the mountains south into Bolivia, Argentina and Chile[1]. With my entire professional experience based in South East Queensland and Tasmania – green, low-altitude places – and having a limited grasp of Spanish, I was already feeling rather out of my depth when I stumbled onto that word: bofedal.

Evidently it was a type of ecosystem, and a biologically-important one too given the surrounding context, but I had no idea what a bofedal was and neither did my Spanish-English dictionary or the online translation services I use, so I searched the internet. A bofedal, I discovered, is a type of wetland; a high-altitude peat bog that acts like a giant natural sponge, sucking up the limited water from snow-falls, glacier-melt and rain squalls in the high peaks and storing it in rich black soils[2]. In the high altitude, low rainfall conditions of the puna, bofedales play important ecological roles closely tied to human history and future sustainability.

Naturally occurring in dips and depressions in the landscapes, bofedales have been deliberately expanded over tens of thousands of years of human habitation in the Andes. Through the digging of canals and construction of dykes, water has been channelled and retained to increase the amount of green vegetation and reliable water present in the landscape. In the cold, dry Andean winters these alpine oases provide a critical water source, and in summer their verdant vegetation supports grazing for lamini[3] (new world camelids), both the domesticated (llamas and alpacas)and their wild cousins (vicuñas and guanacos).

The plants of the bofedales are slow-growing, tough ground-covers and grasses[2,4], including members of the Juncaceae family that are very reminiscent of Tasmania’s alpine cushion plants. Andean geese, ducks and wading birds feed in the bofedales, with many other bird species depending on the permanent water and associated insects on a temporary or permanent basis [4]. Although little is currently known about the insect and amphibian communities associated with these shallow wetlands[4] they are certain to be unique and highly specialised communities of very interesting critters (says she who’d love to poke around with nets, traps and very thick waders). 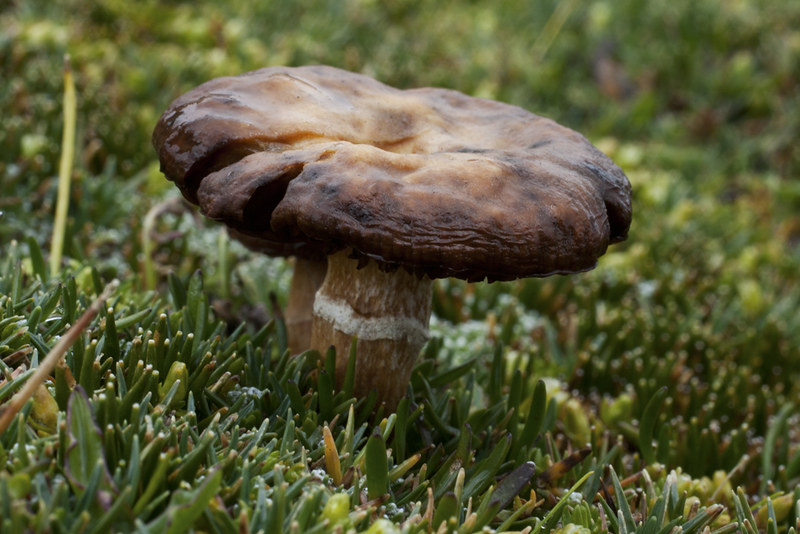 Edible mushrooms grow out of the dense cushion plants in a Peruvian bofedal.

Hydrologically, bofedales are remarkably complex and extremely important for water security[5]. These sponges of the Andes provide reliable sources of water in a landscape with highly seasonal rainfall patterns (a summer wet season with short, high-intensity rainfall events followed by a long, cold, dry and frosty winter). By trapping and transferring surface water underground, where it makes its way slowly down to the coast, these peat bogs recharge aquifers and deliver water to desert rivers in the dry seasons when flows would otherwise stop[2,5], supporting agriculture in the valleys of the coastal desert and the urban centres that have developed around them, including the almost 10 million inhabitants of Lima.

As if that wasn’t enough, like all peatland ecosystems the bofedales are competent carbon storers[6,7,8,9], trapping carbon from organic sources within their saturated soils at average concentrations of around 300 tonnes of carbon per hectare (tC/ha) with some older bogs storing up to 700 tC/ha [2,7,8,10]. Given that average soil carbon levels are around 100 tC/ha[11], and levels in surveyed Australian peat bogs vary between 200 to 1000 tC/ha[12], Andean bofedales are pretty big hitters in the carbon storage world. This locked-up carbon is important because it does not readily decompose; instead trapping carbon molecules in chemical aggregates deep in the damp soils (on average 3 metres of carbony goodness). If a bofedal were to dry out, however, all that lovely stored carbon would escape as carbon dioxide or methane, both known greenhouse gasses. 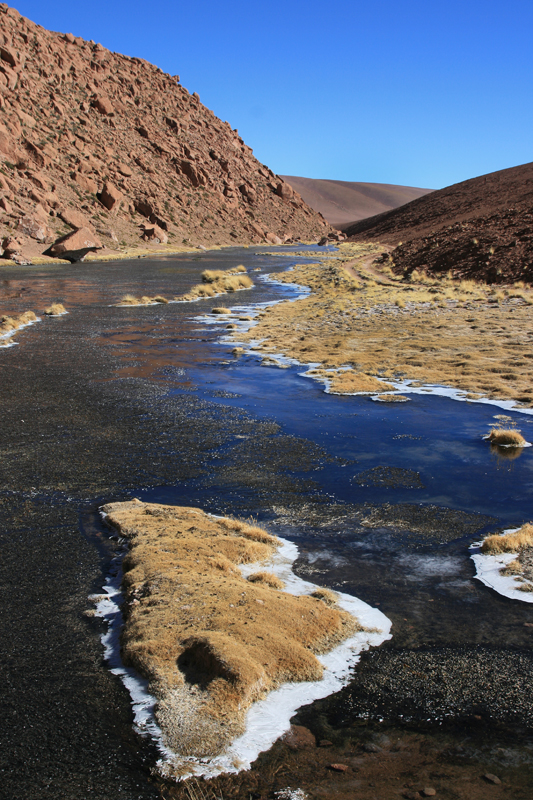 Bofedales in the icy altiplano of the Atacama Desert, northern Chile.

So are bofedales at risk of drying out? In many places, yes. Changing rainfall patterns and glacier retreat associated with climate change are reducing the amount of water flowing into the bogs in most parts of the Andes[2]. Less water in means less soil saturation and thus the escape of stored carbon as it begins to decompose. Lower inflows also mean less water transfer to aquifers and subterranean flows, with impacts on water supplies along the valleys and arid west coast.

Climate change isn’t the only pressure these impressive high-altitude ecosystems are facing: increasing urbanization and the expansion of irrigated agriculture create higher water demands, with bofedales carved into canals or flooded behind dams to sate a thirsty world. Livestock grazing is also doing damage, both from hard hooves of the sheep and cattle introduced by the colonial Spanish damaging the fragile soils, and over-grazing of both native and introduced species in response to economic pressures and the retreat of available wetland areas[2,13].

Mining, too, both legal and illegal, is engulfing and contaminating these fragile wetlands in far too many places[2].

These impacts are difficult to manage given the socio-economic realities of life in the high Andes. The people whose lives are so entwined with this harsh environment face enormous challenges, trying to survive in a modernising economy while following traditional cultural and farming practices, living in a world of scarce resources and near non-existent services, and with deteriorating traditional knowledge of the land falling short in the face of a rapidly changing climate[2,13]. Poverty, lack of education, limited opportunities, culture and the push of rapid modernization all combine to create huge challenges for the preservation of the bofedales, on which tens of millions of people ultimately depend. 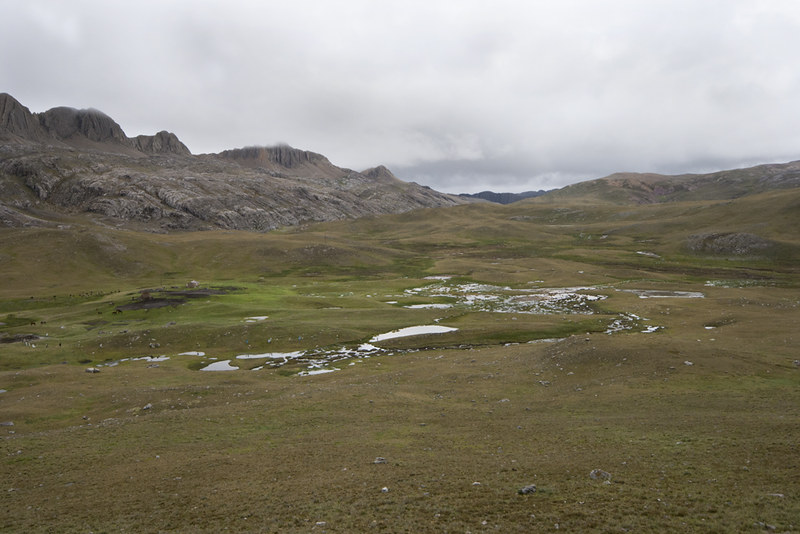 Alpine wetlands are part of complex webs of water in the high Andes, like this sequence of pools, bofedales and streams, all connected together underground.

Thankfully these wonderful wetlands have many advocates and their critical value is now being recognised, with laws established to limit their destruction through industrial development. Researchers from a whole range of countries are scurrying around and studying their ecology and hydrology, and developing plans for their management and protection. Here in Peru conservation groups and government institutions are working with Andean communities to try to defend the bofedales, conducting research to understand their functions, building dykes to expand the area of saturated soils, and educating graziers on the impacts of over-grazing and the management of stocking densities. It’s an enormous challenge, given the complex socio-cultural and economic pressures, the remoteness of the bofedales, competing priorities and the extremely limited resources available for on-ground conservation and protection activities, but slowly awareness is building and there is hope.

It’s been an intriguing journey for me from bafflement to fascination with these quirky ecosystems and their mix of extreme toughness and fragility. A few months ago I was lucky enough to get some first-hand experience with them, travelling with colleagues up into the mountains east of Lima to map the water flows in a site marked for mining. There, at a height of 4 600 mASL we found a system of springs, lagoons and bofedales funnelling water down into a protected river system. Where the hydrological connection is proven, mining cannot take place. For now, these bofedales are safe. 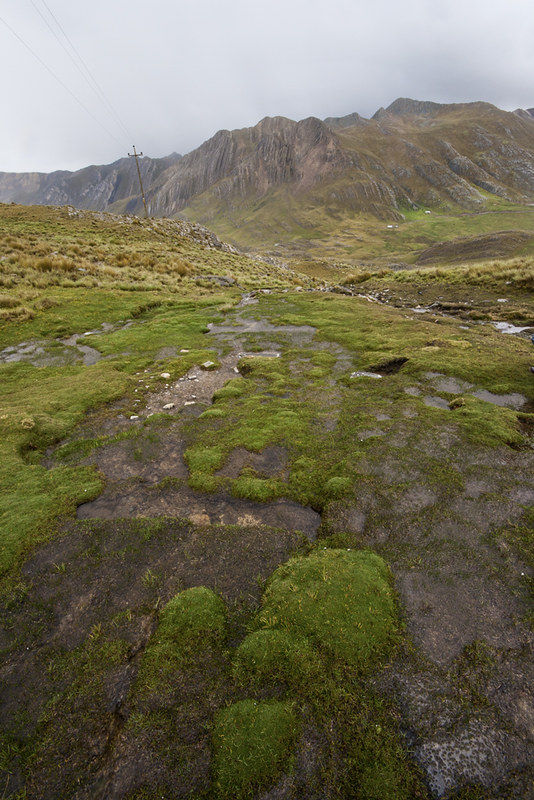 Although damaged by over-grazing, this spring-fed bofedal still plays an important role in retaining water in the landscape through the long Andean dry season.

← Flickers of hope
Tales from the tail-end: 12 months in Lima →

3 Comments on “What the hell is a bofedal?”