Tales from the tail-end: 12 months in Lima

Posted on October 29, 2014 By shapeofthingstoni

Twelve months ago this week I unpacked my bags in a simple hotel room and stepped out to meet Lima, the city that would be my home for the next year-and-a-bit.

Lima… almost 10 million people pressed up against the desert coast. The kind of place where no-one is truly from, if you go back far enough. The pre-Colombian cultures that built their mud and stone temples here fished and worshipped in the summers when the sun shines brightly and the rains pour down in the Andes. In the endless grey days of winter they returned to the hills and the fields of the river valleys. Permanent settlement came with the Spaniards who claimed this swampy coast for their capital in the conquest of the region.

So began the difficult history of this city, a place of clashing cultures and competing motivations. The Spaniards brought with them African slaves, then later Chinese coolies to work the silver mines and guano deposits. Japanese migrants came to settle at the end of the Second World War. Domestic terrorism in the Shining Path years drove the mass migration of Andean peoples to the city outskirts. Now and the promise of work and a better future for their children draws people from the far coast, the high Andes and the steaming Amazon to Lima.

Manchay, a village swallowed up into the southern outskirts of the city

Puente Piedra, an improving suburb in the expanding northern districts

It’s a promise frequently broken, with many migrants trapped in inter-generational poverty. There’s little work for the uneducated and the public education system fails their children; the social fabric buckles and tears, feeding the problems of crime and violence and disconnection. In the broken parts of Lima drunks stumble from illegal cantinas at 10 in the morning; children play in rubble or are put to work, their current earning capacity of more importance than their future potential; and the sticky-sweet smell of cocaine labs drifts on the humid, dirty air. In parts of this city there’s no water supply, no garbage collection, and no rule of law to speak of.

In the privileged parts of Lima new apartment buildings multiply along the coast and expensive restaurants bustle with trade. Tourists, some of whom come for the cheap cocaine, stroll through parks and markets in relative* safety thanks to the hefty police and security presence . Capitalism and corruption grow hand-in-hand as the city expands, with the nascent middle class happy to trade environmental catastrophe and the suffering of out-of-sight others for their newly-found comfort and economic security.

Corruption mars the whole country, enabled by a populace more focussed on what they can gain now though a manipulable system than on what an honest, equitable system might one day bring. Better to live in world where you can bribe your way out of a traffic infringement today than pay to have better-flowing traffic tomorrow. Better to keep the mining-based “economic miracle” going than to risk a downturn by imposing functional checks and controls or environmental protections. Better to exploit the indigenous and rural poor than to provide decent education and services, after all, you’re providing desperately needed employment. Better
to pollute and destroy the environment while there’s profits to made than do the slow, hard work of reforming the national economy to be independent of the profiteering multinationals. 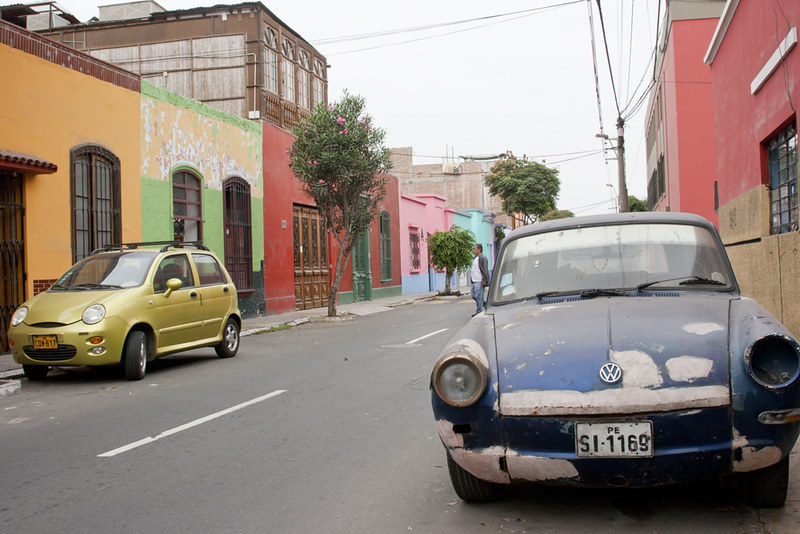 Barranco, the bohemian heart of Lima and modern hipster haven. 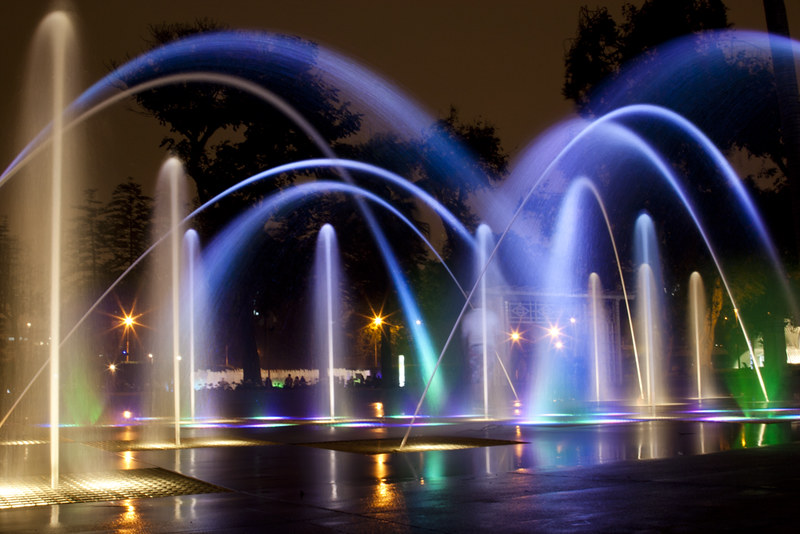 A beautiful fountain park near the city centre contrasts with the poverty in nearby places.

This place frustrates and infuriates me in so many ways, from the daily discourtesies in the bus queues and disquieting encounters with beggars to the systemic failings in infrastructure and services. The lack of camaraderie and common trust, and the ongoing problems that causes, sadden me greatly, but what can you expect in a country where 30 years ago people were blowing each other up, where the government has turned on it citizens and communities turned on each other?

This city confronts my sensibilities and challenges me constantly, and yet I’ve developed a grudging admiration for the place and its people.

Somehow, despite the chaos and the corruption and the pollution and the politics, the people here just keep going. Somehow, with all the mixed-in cultures and values and economic realities the city manages to function. If you look at things on the right angle there is beauty here: in the clamour of the markets, in the tiny brightly-painted houses. There is happiness in the playfulness of the children, in the way the women in crazy high heels sway their hips as they walk. There is joy to be found in dancing and singing and enjoying this moment because the moment is what you’ve got.

On those too-rare days of clear blue skies, with the sun shining bright, anything feels possible here. Anything at all. 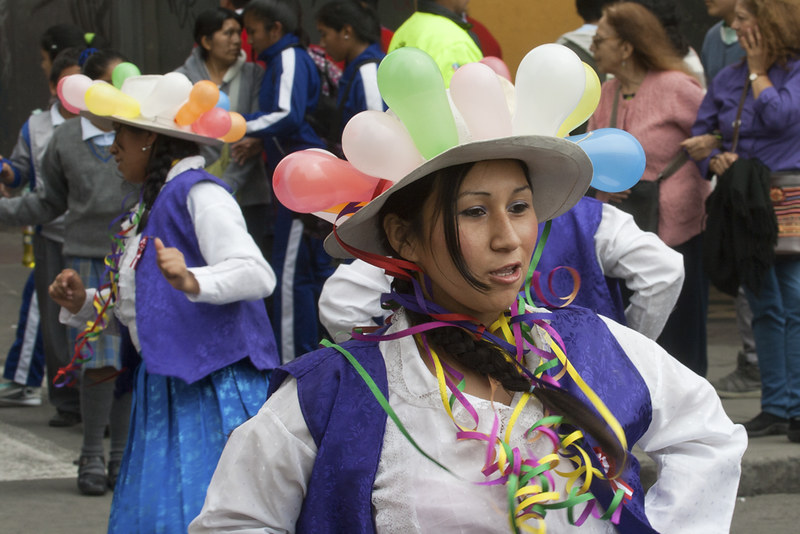 Dancers in a street parade for the national holidays.

I am grateful to Lima for the lessons the place has taught me, even the harsh and dispiriting ones. I will long appreciate the perspective I’ve gained here and people this city has brought into my life. Through being here and doing the work I do I have met some of the most astonishing and inspiring people imaginable. These people are my heroes, working with such limited resources in incredibly difficult and complex situations to make Peru – and the world – a better place. How strong of spirit must they be to keep fighting for social and environmental justice in a place like this?

I am beyond grateful for the opportunities presented to escape Lima and get to know more of this truly astonishing country. I have seen breathtaking things and heartbreaking things I will never forget. I have been to some of the most incredible places: from the stark coastal desert up into the glacier-capped Andes and down to the vast, verdant Amazon. I have travelled through remarkable landscapes and learned of diverse cultures, both extant and extinct. From catching frogs in upland rainforest to talking climate change adaptation with Amazonian tribes to spotting flamingos in the desert to photographing perfect alpine lagoons, I have collected more lifetime experiences that a person ought to in only a year.

All this is thanks to the people Peru has brought me: park rangers, conservation managers, renewable energy believers, passionate educators and dedicated researchers: people whose whole lives are spent in this reality I’m vacationing in. These people – my friends and my colleagues – inspire me and make me more determined than ever to do what I can to build the sustainable future I want to see.

At the moment I’m trying to figure out what that might be; what part I could play in this urgent global game of environmental protection and equitable development. In 7 weeks’ time I head back to Australia with my future wide open and the seeds of plans for further study. I’m interested in the interface between science and politics, in how to influence the kind of good policy needed at national and international scales. I’m interested in the power of communication and engagement for creating change at the grass-roots level. I’m interested in international development and in using my Peru experiences to build a functional framework for the wider world. I need to grow my skills and gain the tools I need to put them to good use.

First though, I’m going to take a little time out to recover from Lima some place green and calm and quiet, far away from the urban bustle, so I can reconnect with nature and the personal values I’ve needed to put on hold here. It’s a little daunting to be starting anew again, but I’m looking forward to cultivating a sustainable little life on Australian soils once more. Oh, and to good coffee: it’s been a while.

There’s a lot I’m going to miss about Peru, and yes, even Lima. I’m pretty sure I’ll be back this way again though, so for now it’s time my thoughts and plans returned to home. Thank you Lima. 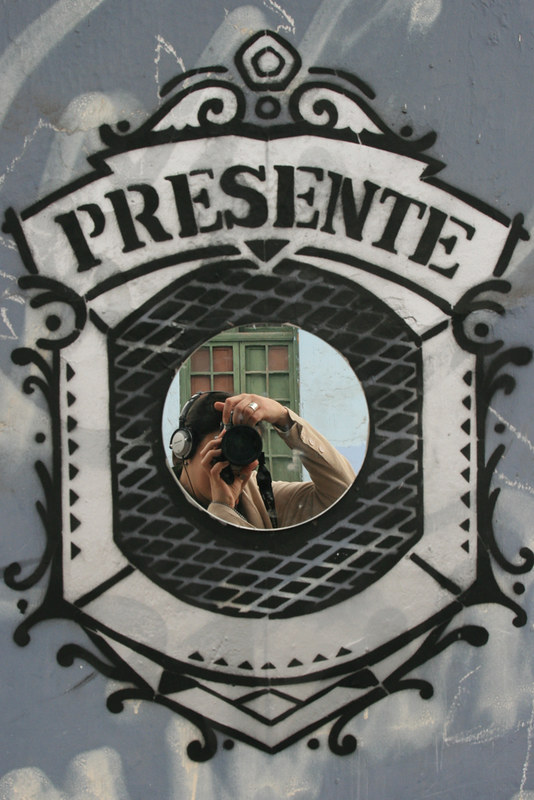 Being present in Lima

* where relative means you might get pick-pocketed or mugged but you’re unlikely to be murdered. That said, someone was assassinated in a restaurant a few blocks from here quite recently.

← What the hell is a bofedal?
How do you conserve a landscape? The case of Nor Yauyos Cochas →

5 Comments on “Tales from the tail-end: 12 months in Lima”